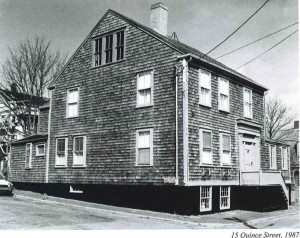 The house located at 15 Quince Street was built about 1812 by Joseph Edwards, a twenty-seven-year-old ship and house carpenter who was married to Lydia Gates.  It was unusual for carpenters to be both housewrights and ship builders, but the deeds for the property and other historic research clearly indicate Edwards was one of the craftsmen who worked in both professions.

Joseph Edwards had purchased the land for his house from Paul Coggeshall in 1811. He resided at his new house until his death in 1863, at which time the property passed to his son James. The house remained in the Edwards family until 1889.