One of our most visible program at the Nantucket Preservation Trust is our house markers. Chances are, you’ve noticed these wooden tablets on historic homes around town. They tell you the date of construction, who built the house, the original resident (if known), and sometimes the house’s original name or function. We’ve marked over 200 house since the program began.

We’ve recently completed work on two new house markers. Researching and documenting the history of Nantucket’s historic homes–and the people who built them and lived in them–is important work. House markers make a great gift and help us improve Nantucket’s historical record.  Click here for more information about our house marker program, or give us a call at the office, 508.228.1387, to discuss a marker for your house.

Behind each marker is quite a bit of information–read on to learn about two of our newest marked houses.

The house at 23 Ocean Ave to was constructed c. 1870 for the Crosby Family. Matthew Crosby was a wealth whale-oil merchant who owned many properties on Nantucket. His in-town house was 90 Main Street, and his summer estate was on 28 Main Street, ’Sconset. Crosby purchased the lot on Ocean Ave in May of 1894, one month after it was advertised for sale in The Inquirer and Mirror.

The lot was formerly known as the “Elkins Lot” and was owned by Captain Edward W. Gardner before Crosby. After Gardner’s death, Crosby purchased the lot from his son-in-law William G. Gardner, and William’s wife (and Crosby’s daughter), Elizabeth B. Crosby Gardner.

Matthew Crosby and his heirs owned the property until August 1879, when it was sold to Edward Finch Underhill, who was responsible for much of the development in the Sunset Heights area of ’Sconset. Within six weeks of purchasing the property, Underhill began making improvements to the house.

In our research, we found that the house was given a name at one point (at least by 1879)— “Fort Sumter,” the first battle of the American Civil War. We know that when Crosby bought the land in 1864, there was no dwelling on the lot, but there was one by the time Underhill purchased the property in 1879. We believe the house was constructed a few years after the war and the name likely chosen to honor the Union victory.

Charlotte Swain was born in 1823. She died January 30, 1899. Charlotte married Enoch Ackley, who died at sea on January 2, 1855 when he was 37 years old. Charlotte and Enoch had one child together, Seth M. Ackley. Charlotte married Luther Pearson, originally from Providence, Rhode Island, in 1863.

Charlotte was a prominent Nantucket figure who was active in charitable and literary organizations on Nantucket. She was a teacher at the Fair Street School. She served as a member or officer of the Nantucket Improvement Society, the Sorosis Club, the Nantucket Relief Society, the Children’s Aid Society, and the Massachusetts Volunteer Aid Association.

Charlotte purchased the land at 8 Nantucket Ave and 6 Grant Ave in 1872. In 1880, Wannacomet Water company installed pipes on the Cliff. In 1882, Eben R. Folger built the house at 6 Grant Ave (known later as Franklin Cottage) for Charlotte, and in 1883, she hired Folger again to build the house at 8 Nantucket Ave (known as Oneonta Cottage starting around 1895). Oneota Cottage was advertised in the Inquirer and Mirror for rent from 1895 to 1920. Charlotte owned a property on Orange Street that was her primary residence. 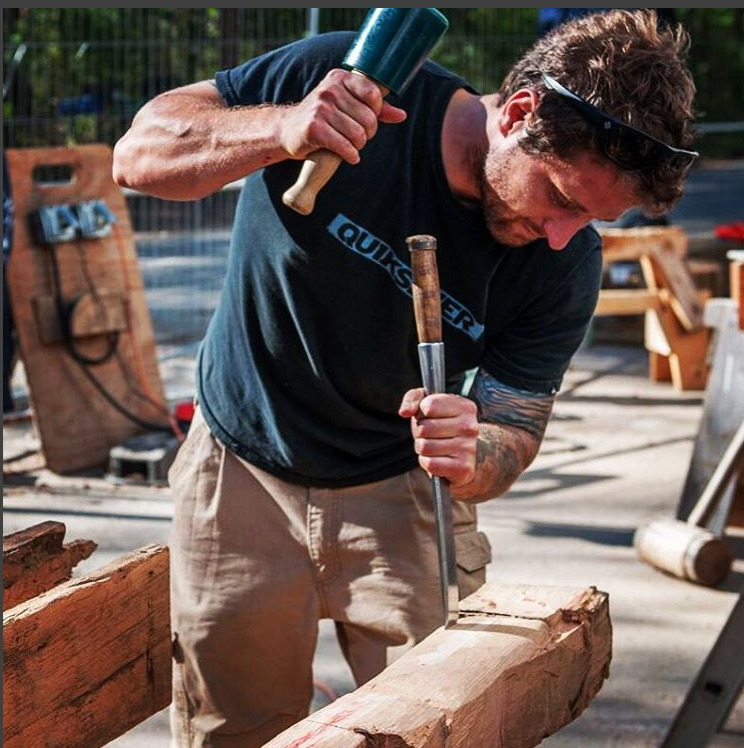 “I get excited when I see a timber frame house on Nantucket,” Hollis Webb says, “What do I have to do to get other people excited about them, too?”

A Nantucket native, Hollis is one of just eleven students who graduated this past June from the North Bennet Street School’s (NBSS) heralded Preservation Carpentry program. He is the 2017 and 2018 recipient of the NPT’s Mary Helen and Michael Fabacher Scholarship.

Carpentry has been a part of Hollis’ life for as long as he can remember. Family and friends worked in the trades on Nantucket, and Hollis has experience in many different aspects of homebuilding. Prior to enrolling in the Preservation Carpentry program, Hollis worked as a carpenter, including on some traditional projects with Pen Austin.

“Nantucket has a solid community working in preservation and historical architecture,” Hollis says, “All these first period homes are just five minutes away.”

With Nantucket’s high concentration of historic homes, Hollis knew a program in preservation was the right next step in his career.

Preservation Carpentry first-year students learn basic woodworking skills in the shop, with an emphasis on the use of hand tools. “We applied some of the basic timber framing we learned in the first year to a first period home. That was incredible,” Hollis says.

Second year students take their skills on the road. Hollis’ class recently completed a sill restoration on a 1720s house in Norwell, MA. Sill repair was one of the more challenging projects Hollis has encountered at NBSS, “You’re working on projects with no easy solution. You’re figuring everything out as you go.”

Attending the NBSS has changed the way Hollis views his hometown. “I remember coming back home during Christmas after my first semester, and it was like seeing Nantucket for the first time. I was seeing the island through a different lens.”

After graduation, Hollis plans to return to Nantucket full time to live and work. “I’m excited to get back. There are projects in every direction,” he says, “The best thing that could happen would be to work with a homeowner who really appreciates the idea of restoring their home.”

Hollis encourages anyone interested in applying to the North Bennet Street School to work in carpentry for a few years, and “find a way to study Nantucket’s old houses, not just to study the frame, but to dig into the history of the house.”

At the Nantucket Preservation Trust, our doors are always open to help you learn more about the history of Nantucket’s architecture, or about our scholarship programs for students who want to learn traditional trades.

This article originally appeared in the 2018 issue of Ramblings. You can read the full magazine online here.

Old North Wharf was originally built in 1770, following the construction of Straight Wharf in 1723 and Old South Wharf in the 1760s.

The original structures on Old North Wharf were all destroyed during the fire of 1846. By the 1870s, the area was bustling again with fishing and sailing. In the early 20th century, many of the warehouses, fishing shanties, boat building workshops, and carpenter’s shops were converted to artists’ studios, summer cottages, and “picnic houses.”

Join us on a digital stroll down Old North Wharf…

2 Old North Wharf: Barzillai Burdett, boat builder, c. 1856. Burdett built whaleboats, row boats, and small catboats in this shop. In 1887, he built the catboat Dauntless, which he used to ferry bathers from town to cliffside beaches.

Most of the buildings on Old North Wharf have seen many lives–first as fishing shanties, boat building workshops, carpenter's shops, artist's studios, and summer cottages. This is one of the only structures on the wharf that is still a warehouse, a reminder of the working waterfront. And the vintage truck was just good timing. 🙌

A post shared by Nantucket Preservation Trust (@ackpreservationtrust) on Sep 25, 2018 at 7:02am PDT

4 Old North Wharf: While other working buildings have been converted to resort cottages, this warehouse remains a reminder of Nantucket’s working waterfront.

12 Old North Wharf (Mary F. Slade): Just where did the name Mary F. Slade come from? The Mary F. Slade was a three mast barque of 199 tons, 95 feet long, built in 1848 at a shipyard in Scituate Harbor. She was made of oak and iron and copper fastened. No details of how or when she was lost, or how her quarterboard reached Nantucket, but it is assumed she was lost on the a shoal off Nantucket.

10 Old North Wharf: Austin Strong Boathouse, 1923. Commodore, artist, playwright, and philanthropist Austin Strong was a colorful character—you’d have to be to be the man behind the Rainbow Fleet, step-grandson of Robert Louis Stevenson, and friend to puppeteer Tony Sarg. Strong was the first person on Old North Wharf to turn a fishing shanty into a boathouse—or more specifically, a “land yacht.”

18 Old North Wharf (Wharf Rat Club): This building was originally used for culling quahogs, then became a fishermen’s supply store. People started gathering to swap stories and hang around the shop, and by 1927 the Wharf Rat Club was established. Rats still tell stories there today, and there are no fees or official meetings. The only requisite for membership is the ability to tell a good story.

A post shared by Nantucket Fine Living (@nantucketfineliving) on Jul 3, 2018 at 7:18am PDT

The cottages Lydia, Independence, Constitution/John Jay, Enterprise, and Nautilus were all named after whaling ships that belonged to brothers Charles and Henry Coffin. (Herman Melville’s one whaling voyage was aboard the Coffin-owned whaleship Charles & Henry.)

11 Old North Wharf (Enterprise): A boat storage and maintenance building from 1920 until the 1950s, Enterprise became a summer cottage in the 1960s.

There are lots more cottages to explore, as we find more information, we’ll update this post!