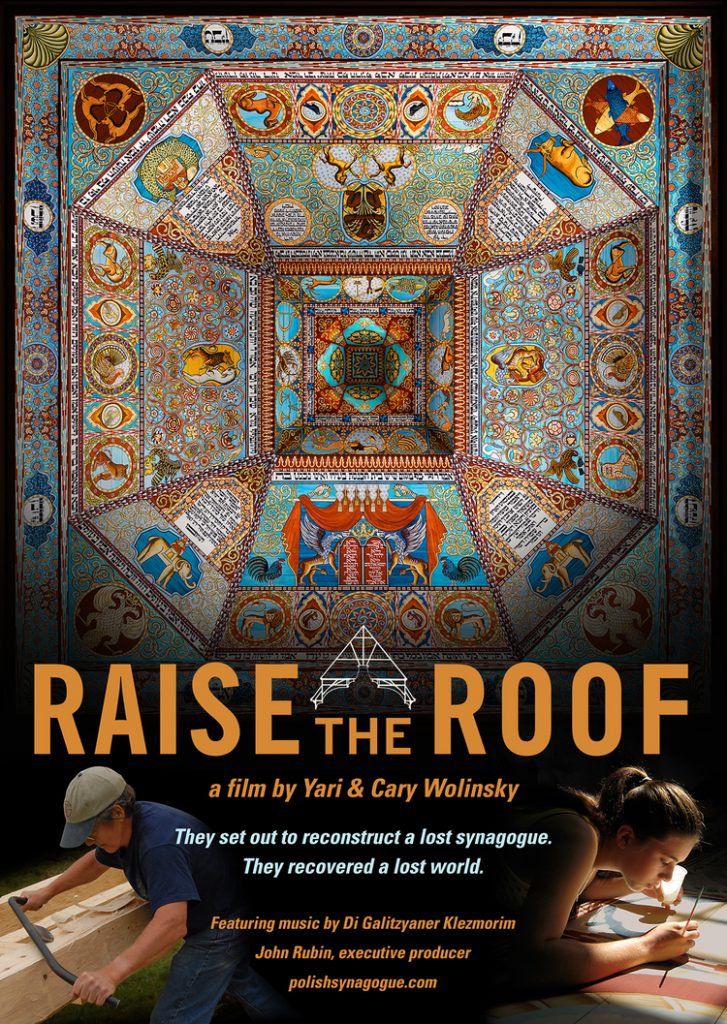 We are thrilled that Esta-Lee Stone, NPT board member and Preservation Month committee chair found the 2016 Preservation Month opening film, Raise the Roof! We would like to thank The Nantucket Atheneum and Congregation Shirat Ha Yam for co-sponsoring this event. The film has been provided by The National Center for Jewish Film, www.jewishfilm.org

The two screenings will take place on the following days and both will conclude with a Q&A session featuring special guests: Rick and Laura Brown and Filmmakers Cary and Yari Wolinsky.

Sunday, June 12 at 6:00 pm
Seating is limited. Reservations are not required.

“Artists Rick and Laura Brown are not Jewish and not Polish, and yet they set out to rebuild Gwoździec, one of the magnificent 18th-century wooden synagogues of Poland, the last of which were destroyed by Nazis during World War II. Their vision inspires hundreds of people to join them. Using their hands, old tools and techniques they rediscover Gwoździec’s history, culture, and art.

Raise the Roof follows the Browns and the Handshouse Studio team to Sanok, Poland, as they begin building the new Gwoździec roof. The crew has six weeks to hew, saw, and carve 200 freshly logged trees and assemble the structure. Working against this deadline and despite torrential downpours and exhaustion, the team must create the structure, and disassemble it again for shipping and eventual installation.

To paint the intricate ceiling murals, the Browns face another challenge: the 1914 photographs of Gwoździec are black and white and there is only one, partial color study.  Using that as their Rosetta Stone, the Browns slowly build a library of Gwoździec’s colors.

Armed with pigments and stacks of wooden boards, the team sets up to paint the ceiling mural in what seems to be an art gallery in Rzeszów, Poland.  In fact, this building and those in seven other Polish cities where they will work during the summers of 2011 and 2012, are all former or active masonry synagogues. Each Handshouse-trained painting leader is tasked with creating the mural’s most iconic images and training students to paint thousands of flowers and vines.

Although Rick and Laura Brown chose to rebuild the Gwoździec because it was one of the best documented, the historic material they found was spotty. Many questions about the synagogue were left unanswered:

What sparked this period of profuse and energetic construction and painting?

Why were the Jews of this time willing to break the Second Commandment prohibition against graven images in decorating this building?

What cultural and artistic movements inspired artists to create these resplendent spaces?

Raise the Roof  takes us on this journey of discovery.”