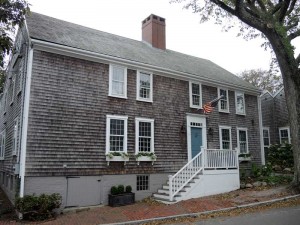 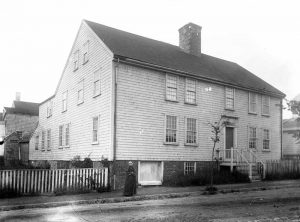 Local folklore handed down for more than a hundred years suggests that a portion of the house at 10 Pine Street was reclaimed from Parliament House—the Nathaniel and Mary Starbuck homestead at Sherburne. This large structure, constructed in the last quarter of the seventeenth century, is said to have been dismantled and reconstructed at 10 Pine about 1820. There is no reason to think this story is untrue, since dismantling and reusing timbers and other building materials has over the centuries been an essential part of the island’s building tradition. In fact, fifteen houses in town have been identified as possibly containing sections of early houses from the Sherburne settlement. Usually there is no documentary evidence to substantiate house moves or material reuse, but architectural historians have studied 10 Pine Street and concluded that framing elements in its northwest section are consistent with late- seventeenth-century building practices.