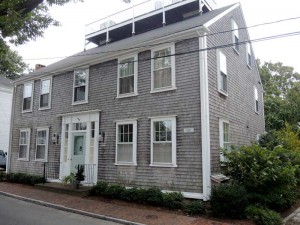 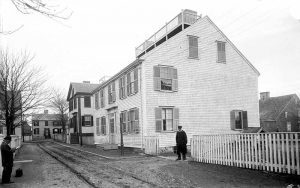 Darling Street lies in the Fish Lots, a division of land made by the Proprietors of the island in 1717. The twenty-seven Fish Lots—one for each of the twenty original landowners’ families, and one-half for each of the fourteen half-share tradesmen’s families—extend from Main Street to the vicinity of Silver and Weymouth Streets. The east and west bounds of the division are Quanaty Bank, now known as the Orange Street bluff, and Pine Street. The street name was first recorded in the 1799 list of town streets compiled by Isaac Coffin, and named for the Darling family who resided at 10 Darling Street in the 1790s.