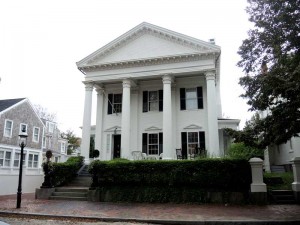 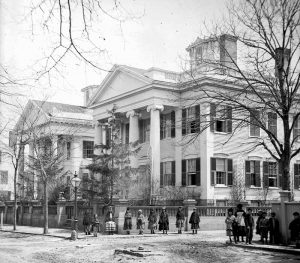 Every house has a history to tell, including 94 Main Street, one of the grandest of the historic homes on-island. Known affectionately as one of the Two Greeks, this stately house was constructed in the Greek Revival style and completed in 1847. The building of the house must have been an optimistic sign to islanders at a time when the whaling economy was suffering and the Great Fire had just destroyed a large portion of the town. The house was the last true mansion constructed by a prosperous whale-oil merchant.

The Hadwen-Wright house was completed in 1847 and is considered the finest and most lavishly decorated examples of Greek Revival-style domestic architecture on Nantucket. The house was designed and constructed by Frederick Brown Coleman (1791–1852), a local builder/architect who also designed Hadwen’s adjoining house at 96 Main as well as major public buildings such as the Ionic temple front of the Methodist Church (2 Centre Street, 1840) and the Atheneum (1 India Street, 1847).