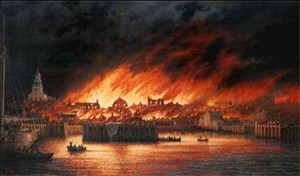 Although the town has many early 18th century structures– the commercial core largely dates to the mid-19th century due to the Great Fire that occurred the night of July 13, 1846. The Fire was started by a defective stovepipe in a hat shop and spread quickly through downtown –fueled by wooden buildings, high winds, and whale oil in the warehouses. The fire destroyed over 250 buildings, but with the help of donations from the mainland, the residents began rebuilding almost immediately. Many new buildings, like those along Main Street, were constructed of brick for fireproof purposes in the then popular Greek Revival style.