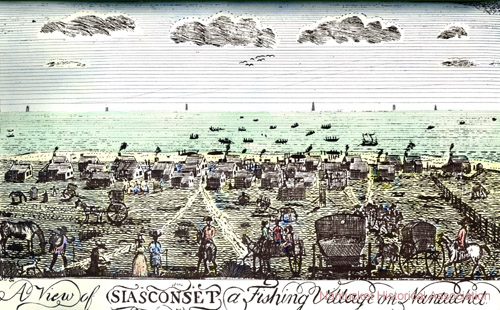 “A View of Siasconset a Fishing Village on Nantucket” by David A. Leonard, 1797.
(Photo courtesy of Nantucket Historical Association)

Did You Know…That ’Sconset, first established as a fishing station in the late 1700s, was among the first summer resorts in the nation? Those calling ’Sconset their home away from home included whaling captains and their families, prosperous whaling merchants, and  retired mariners, including Benjamin Lawrence, a survivor of the ship Essex. By the end of the 19th century the village was referred to as The Actors Colony due to the large number of Broadway actors and artists who summered there. Today ‘Sconset retains much of its early architecture and still charms islanders and visitors alike.