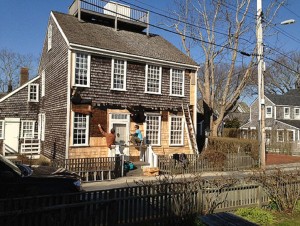 With the support of grants, the Mitchell House’s southern façade has been re-shingled.  The old shingles were no longer sufficient to protect the Mitchell House from weather.  The shingles had shrunk, curled, and left significant gaps between one another courtesy of sun, rain, and age.  This can allow water to penetrate to the sheathing and cause rot and leaks.  They were last replaced circa 1960.

The Mitchell House contracted with Nathan Killeen of Nathan Killen Old House Restoration to do the work.  Nathan has worked on the Mitchell House for many years with Sanford Kendall who is now retiring.  Over the course of two weeks, with carpenter Matt Anderson, Killeen stripped the shingles by sections at a time.  There was minor sheathing rot at the base of the House so these parts were replaced in-kind with older, non-pressure treated wood.  Some sill rot was also discovered and a piece of wood was sistered to the old sill once the rot was cleared away.  The original sill just needed some strengthening.  Wood splines were placed along the corner boards, as well as around the windows and front door.  This will keep water from penetrating.  Tar paper was not used as this is not historically appropriate and also acts as a vapor barrier – trapping moisture in the House and sheathing.

We think based on nail holes, that this is only the third time the façade of Mitchell House has ever been re-shingled.  The sheathing and corner boards, as well as the trim for the windows is original – and the sashes and door are too, of course!  We also found carpenters’ marks, sawyer’s marks from when the wood was cut, and even better – shavings from the carpenters when they built the house in 1790!  These were stuck between the sheathing and the interior wall in the space that exists.