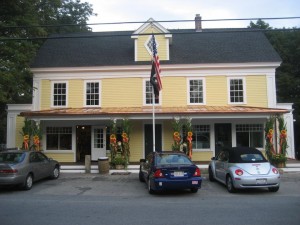 Welcome to the first post of a new series titled “Friday Find”. The weekly posts will feature unique preservation facts, people, interviews, news and more! You don’t have to be a preservation buff to find these posts interesting! To kick-off the series the first post features an award winning comedian and actor who is most notably known for the NBC series The Office: Steve Carell. Have we sparked your interest yet? What you probably didn’t know about Carell is he, along with his sister-in-law Tish Vivado, has been the owner of Marshfield Hills General Store since 2009. No, this is not your ordinary chain store but rather a 790-square-foot general store that was built in 1853. Carell, who summers in Marshfield Hills, MA saw the opportunity to purchase the store and as Boston.com quoted, “preserve a little piece of history.” Today, the store is run by Tish Vivado along with nine other employees and it has helped maintain a sense of community for the small town of Marshfield Hills, MA.

After purchasing the store Greg Carell (Steve Carell’s brother) was put in place to supervise the buildings’ restoration. Carell felt preserving the nostalgic business was important and this included proper architectural preservation. We applaud him for making the goal of the NPT, “to preserve our architectural heritage for present and future generations to enjoy.” a reality for another small Massachusetts town. As he was quoted on Boston.com, “Places like the Marshfield Hills General Store represent a gathering place, and give people a sense of community. These spots are growing more and more scarce. I hope to keep this particular one alive and well”, which is exactly what he has done. The store located at 165 Prospect Street, Marshfield Hills MA is open seven days a week and carries a variety of items including: penny candy, beer/wine, toys, jewelry, groceries, coffee and muffins, and of course your local newspapers. If you happen to be in Marshfield Hills, MA stop in, you may even had the chance to see Carell himself who is known to make appearances from time to time!  Check back next week for the next “Friday Find” you never know what you may learn!