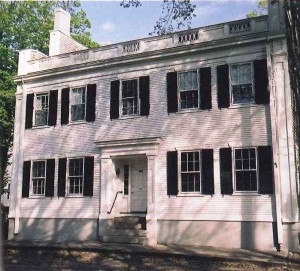 After the American Revolution, new architectural styles emerged including what is known as Federal architecture. This style has symmetrically placed windows and sometimes elegant classical features such as fanlights above the front doors and columned porticos. In later Federal homes, the central chimney gave way to dual chimneys along the roof ridge that eventually were built at opposite ends of the house. Clapboards also came into favor as the material of choice for house fronts. Excellent examples are found today along Main and Orange Streets.