Excerpted from Off Centre: The Wesco Acre Lots The Houses and Their Histories
An NPT publication written by Betsy Tyler 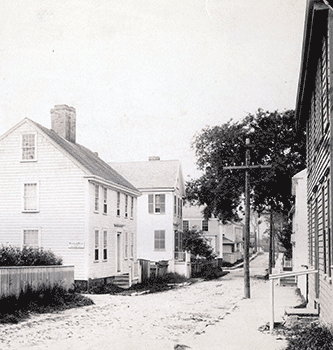 Laid out in 1678 as the southern boundary of the Wesco Acre Lots, Liberty Street is older than Main Street, which was created by the Proprietors more than thirty years later but did not become widely used until after Straight Wharf was built. The dwellings on Liberty Street are some of the earliest in town, but among the eighteenthcentury dwellings are a few houses built in the mid-nineteenth century, and even in the 1870s and ’80s, on sites where much older houses once stood.

It was the custom on Nantucket in the seventeenth century, and for most of the eighteenth as well, to build houses facing south for the obvious benefit of light and warmth, making the north sides of the parallel streets in the Wesco Acre Lots the preferable house sites. This is certainly true of Liberty Street, where the houses on the north side are generally older than those on the south, which is broken up by the side streets Walnut and Winter. At Liberty Street’s origin on the north side of the Pacific Bank there is little distance from Main Street, and up to Walnut Street there is but one dwelling squeezed behind the Main Street mansions. As Liberty Street heads directly west, Main Street veers slightly southward, creating more expansive lots for those grand houses and providing room enough for dwellings on the south side of Liberty as well.

An important house no longer standing on the northeast corner of Winter and Liberty Streets was the home of Walter and Elizabeth Folger and their children, one of Nantucket’s most accomplished and interesting families. Walter (1735–1826) married Elizabeth Starbuck (1738–1821) and they had eight talented offspring, among whom were Walter Folger Jr., inventor and state representative; Phebe, a talented artist and poet who also taught both navigation and needlework; Gideon, who was a whale oil merchant; and Rebecca,whose only surviving son, William C. Folger, became a renowned historian and genealogist. The Folger’s eighteenth-century dwelling was replaced by a new house in the 1830s. An eighteenth-century house belonging to Silas Jones Jr. at 20 Liberty was also removed, and a new house built there in 1885. East of Jones’s house was “a small piece of common land next to the claypit.” Henry Barnard Worth, author of Nantucket Lands and Land Owners, confirms that the clay-pit area included Winter Street and land extending about fifty feet west. Perhaps island potters and brickmakers used the clay in the seventeenth and early eighteenth centuries, but there is no evidence of it today.