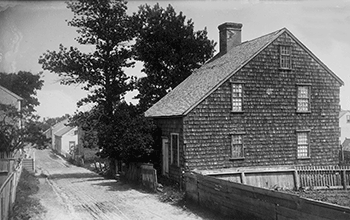 Most people think that the lean-to house was the earliest house form on island, but it wasn’t. The lean-to house is easy to spot—having a full two-story façade, or front elevation, and a one-story rear elevation connected by a long sloping north roof (called a catslide), and a single massive chimney.

Nantucket’s earliest house styles, known as English or Medieval, often evolved into lean-to houses by the addition of a one-story wing. The leanto, like other early house forms, came to Nantucket from the mainland. The form was so popular that by the first decade of the 1700s most houses on Nantucket were constructed with lean-tos incorporated into the original design.

The addition of a lean-to or the construction of a house with a lean-to incorporated into the original design (known as the integral lean-to house) occurred because it made sense. The lean-to house provided additional rooms on the first floor, including a keeping room (kitchen) that left the hall and parlor available for other uses besides cooking. Like other early houses, lean-tos were built facing south, thereby providing protection or insulation for the main section’s north side. Early builders knew that placing the lean-to’s long sloping roof to the north helped to direct wind up and over the structure. Clay Lancaster in The Architecture of Historic Nantucket notes that of the forty integral lean-to houses extant about twothirds face southward. Some of those not oriented southward were moved from their original sites. 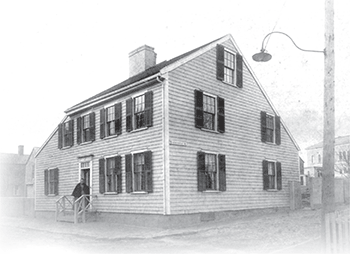 This functional form remained in favor with Nantucketers for many years. The construction of integral lean-to houses continued into the mid-eighteenth century, and it was not until the introduction and acceptance of the typical Nantucket house (see Ramblings, Vol. 4) that the form fell out of fashion. Even so, the lean-to was not abandoned but incorporated into the design of houses including the smaller lean-to (1 ¾ stories high) built from the late eighteenth century and into the first quarter of the nineteenth century.

Of the two versions, half houses were the more common and were built for possible future expansion. The half house usually had a chimney on the roof ridge at the end nearer the front door. The chimney could be easily added to with the expansion of a shed-roof lean-to addition or a similar sized two-story wing. These lean-to forms appear to be the first house forms on Nantucket that were originally shingled, although it is possible the earliest versions had plank board exteriors, but examples no longer exist. Like their predecessor (the Medieval or English house) lean-to houses often have articulated brick chimneys. The earliest examples had casement windows, but all surviving forms have sash windows. In most instances, windows are asymmetrically placed, and those on the south elevation were usually larger to capture solar heat—often with twelve over-twelve lights while nine-over-nine light windows are found on the upper floor and elsewhere on the building.

Because the lean-to is one of the earliest house forms, identifying them can be difficult since most examples have undergone alterations over the years. These houses were also moved, and their lean-to sections often were raised, making their rear elevations a full two stories high. Hence, many houses with lean-to beginnings hold a wealth of layers ripe for uncovering by the curious owner, architectural preservationist, or traditional building contractor.

Today, the lean-to form can be easily adapted for modern living, and those that retain evidences of their original interior features are treasured and are unfortunately increasingly rare. Fewer than fifty true lean-to houses remain, and many of them have undergone major changes that have destroyed much of their historic integrity.