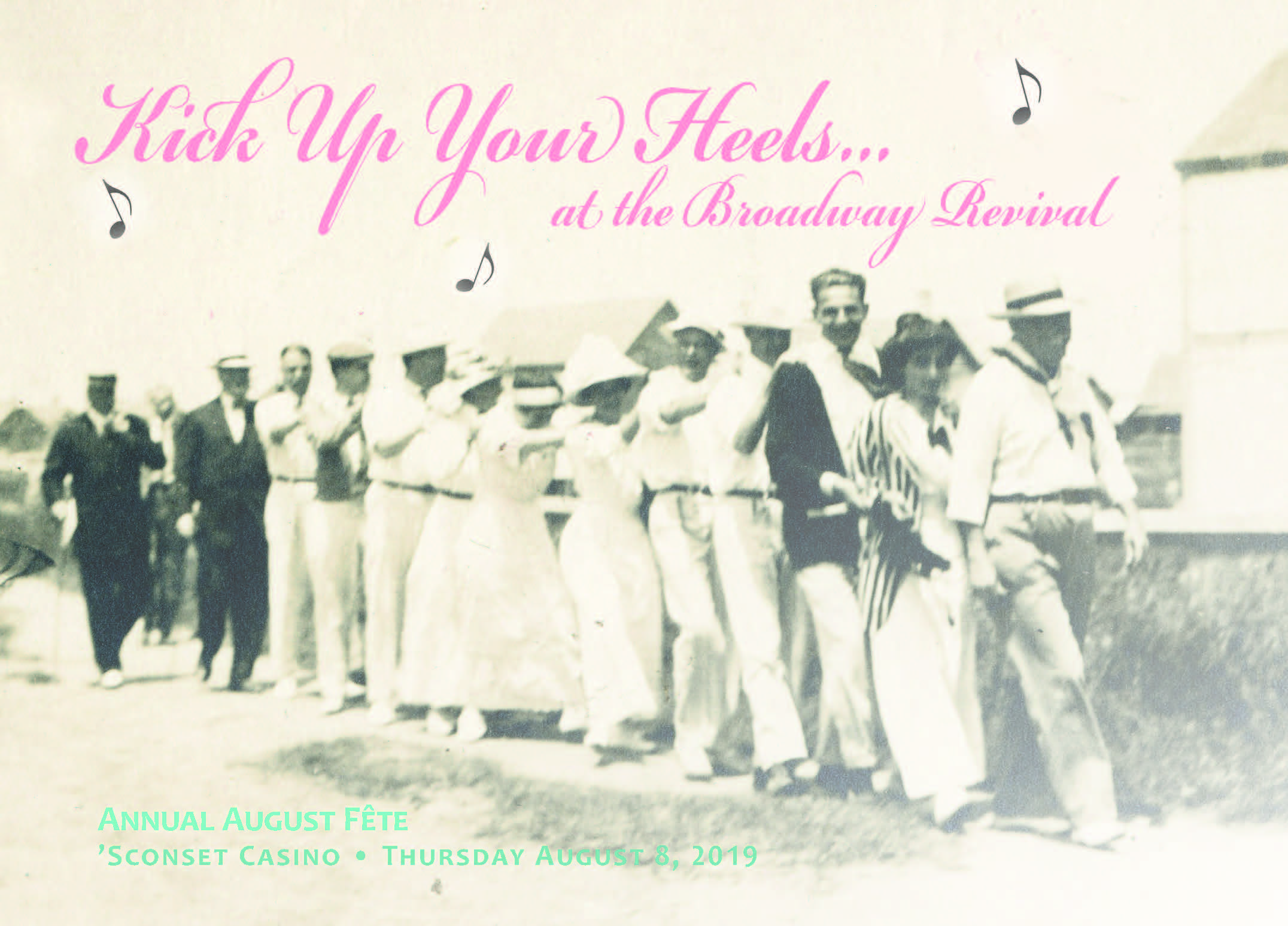 Here, take a peek at the houses that August Fête  attendees will get a chance to tour: 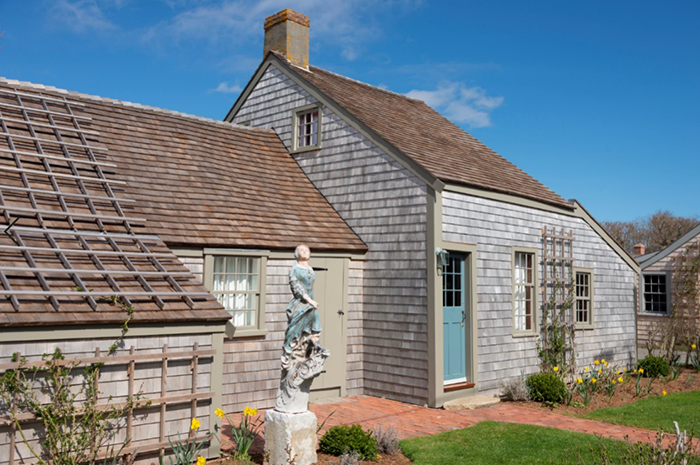 Local lore has it that Shanunga was built in the 1680s and moved to its site on Broadway from nearby Sesachacha. The fish house’s name derived from the ship Shanunga of Philadelphia, which was lost in 1852 off the south coast of the island. The vessel’s quarterboard and figurehead graced the yard of the cottage for many years. The oldest section of Shanunga is the T-shaped south end. The north end’s tall section probably dates to the late 18th Century and the lean-to along the side lane was most likely added in the 19th Century.

Uriah Swain (1774-1810), who held the property prior to 1800, was one of the island’s most successful whaling masters. Upon Swain’s death in 1810, the cottage came into possession of his daughter, Elizabeth Swain Carey (1778-1862). Elizabeth, known as Betsey, married James Carey, captain of one of the island’s most successful ships, the Rose. Tragically, James died on a voyage to China in 1812, leaving Betsey with two young children. She ran a store and boarding house on lower Main Street, and later operated Shanunga as a shop and public house. After her death, the cottage passed to her daughter, Betsey Carey Baxter (1806-183), whose husband, Captain William Baxter (b 1805) was ’Sconset’s unofficial postmaster. The cottage served as the local post office and remained in the family into the early 20th Century. 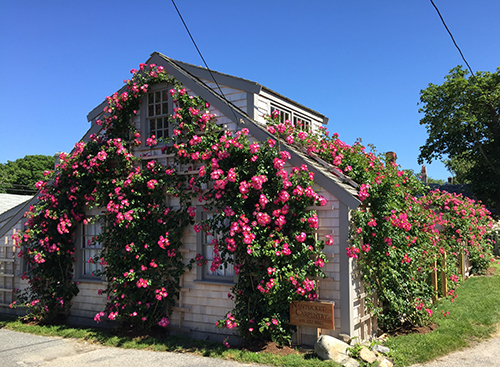 The construction date of The Maples is unknown, but Edward Underhill wrote in the 1880s that it was held by Latham Gardner in 1814. It’s possible that the fish house was built by Gardner (1760-1830), a Nantucket selectman and town clerk who is said to have served with John Paul Jones as a petty officer on the USS Ranger before becoming a whaling master. Local lore suggest that the house was built during the War of 1812, when iron for hardware was rare, since the house is among the few that were originally constructed with wooden hinges and other wooden hardware in lieu of iron.

The 1835 map of the village indicated the owner had the initials “B.C.,” who may be Betsey Carey—owner of Shanunga, the house next door. By 1858, The Maples was owned by David Mitchell (1799-1875) a successful blacksmith with a shop in town along the wharves and extensive real estate on island. For much of the late 19th Century, the cottage was known as the Eliza Mitchell (1808-1896) house, for David’s forth wife and widow. Today, the lane between Shanunga and The Maples still bears the Mitchell name. 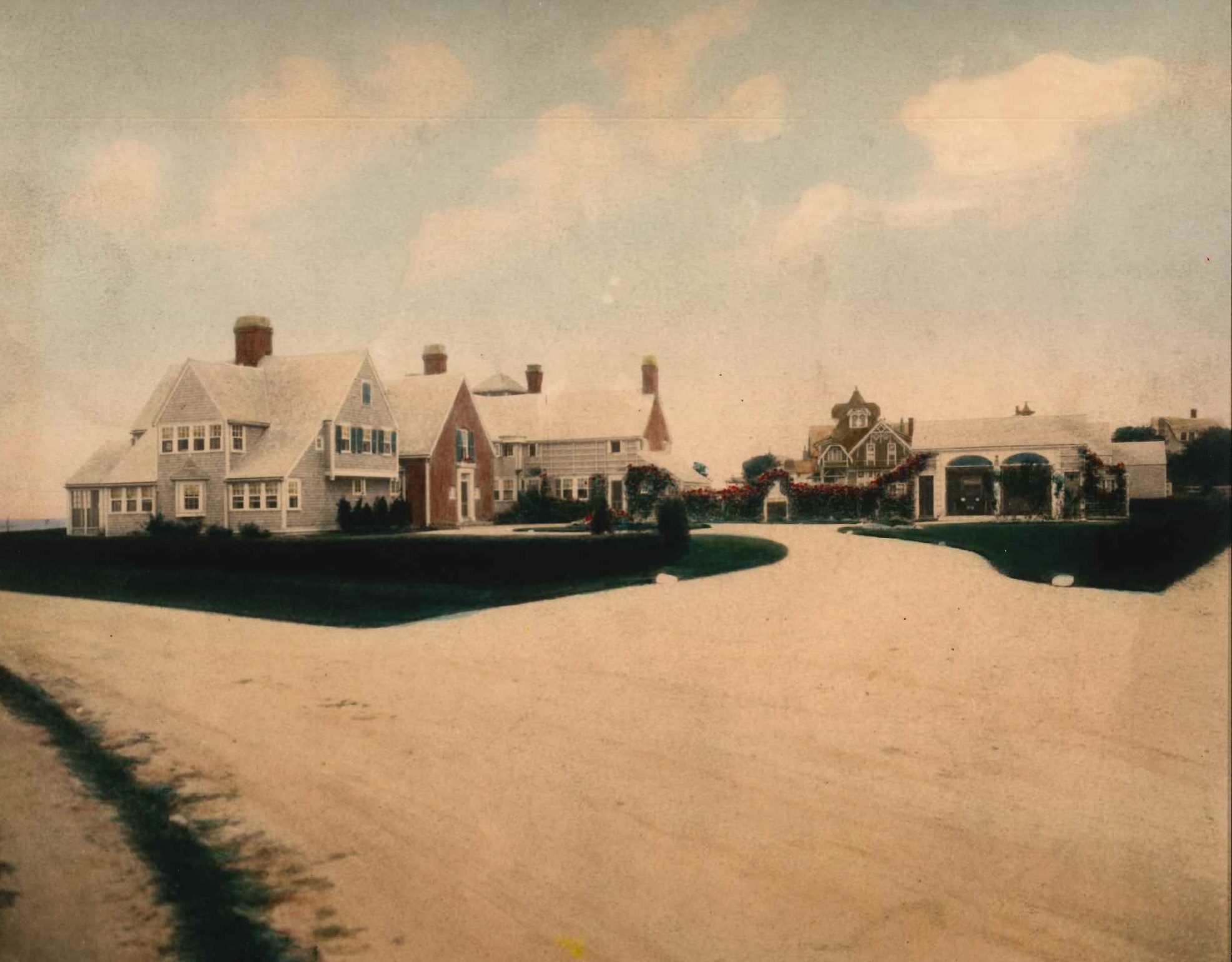 Harry Lange Burrage (1872-1951) president of the Connecticut Cotton Company and banker, purchased the Ocean View Annex property in ’Sconset in 1919, with plans to tear down the old four-story building and put up a house in its place. Burrage married his second wife, the actress Mabel Davis (1886-1965) on October 14, 1919.

One Ocean Avenue was designed by the Boston architect William H. Cox (1879-1948). Cox designed the Chatham Bars Inn, the Cross Trees mansion in Chatham, and housing for workers at the Connecticut Mills Company, where Barrage was president. The work of razing the old Ocean View Annex started in the fall of 1919. Work continued into the summer of 1920, and Harry and Mabel sailed from Boston on their yacht to check on construction.

In November 1923, the Burrage family sold the grand estate to Regan Hughston (1875-1951) and Maribel Hartman Hughston (1875-1958). At the time of her their marriage in 1918, Maribel was known as Ohio’s richest woman. Regan was a vaudeville star, and the couple met in 1911 when Regan was directing a play in Columbus, OH. Regan appeared in three silent films in the 1910s, and he was a member of the George Fawcett stock company in Baltimore in the early 1900s.

The Hughstons employed the Wilson family as domestic workers, though the Wilsons lived in Codfish Park. Clarence F. Wilson (1901-1993) was the Hughston’s private chef. Originally from Bermuda, Clarence came to the US in the early 1920s. He was married to Florence (Flossy) Adlina Deshields, also from Bermuda. They had three daughters, Lois Genevieve, Vivian Louise, and Joan Rita. The Wilson family arrived on Nantucket in May of 1938 where they spent 15 year employed by Regan and Maribel Hughston, both on Nantucket and in New York. Their 50th wedding anniversary was honored by all ’Sconset in 1975, and when Clarence died the flags at the ’Sconset rotary flew at half-staff.

On August 5, 1871, The Inquirer & Mirror reported that “E.H. Alley has purchased a tract of land at Siasconset near the verge of the bank and has also purchased the house on the Charles C. Folger Farm, which he intends removing to ’Sconset, to make two cottage houses of it.” Svargaloka is the farmhouse that was found on Hawthorne Lane, just west of town, and moved to ’Sconset. Elijah H. Alley (1819-1888) was a clothing retailer from Lynn, Massachusetts, who married Mary Burdick (1820-1888) of Nantucket. They had no children, and in 1888 the property descended to Mary’s sister Susan. It would eventually pass to Susan’s daughter, Eva Channing (1854-1930), who with her mother appear to have been frequent visitors to the cottage during the time the Alley’s lived there. A student of Sanskrit, Eva is credited with naming the cottage Svargaloka, meaning “land of paradise.” Eva made improvements to the house, including the construction of a piazza that once graced the Elbow Lane elevation but was destroyed in a windstorm in 1914.

In 1882, a group of men formed a corporation under the name of Siasconset Union Chapel and organized a board of trustees. Builder and owner of the Ocean View House, Charles W. Robinson, and Dr. Franklin A. Ellis, both developers of the Sunset Heights area near Pochick Street, offered a choice between two Sunset Heights parcels for the worship center; however, the board decided on a lot on New Street which was closer to the village center and given by trustee Horatio Brooks. The building plans were donated by a Mr. Varney, a Detroit architect, and Robinson was awarded the bid for construction at a cost of $1,680.

Before construction, the name for the Gothic Revival-style chapel was uncertain. For a time, there was talk of calling it “Baxter’s Saints’ Rest” after Captain William Baxter (of 10 Broadway) a pious mariner who adhered to Christian principles though surrounded by temptation and sin. The church was finally named Union Chapel and was completed in 1883. 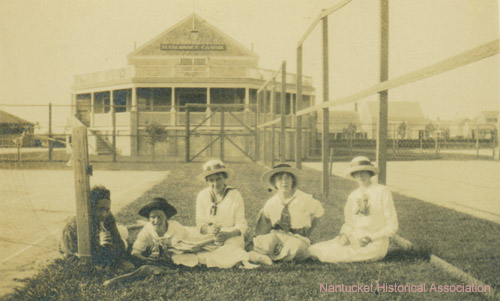 In 1892, $800 was collected to erect a casino building, and Mrs. Emily E. Rice of Detroit agreed to donate a lot on New Street for a “Hall of Amusement” with dedicated indoor and outdoor community space for social, dramatic, and sporting events. The Siasconset Casino Association was formed in 1899. Architect John Collins drafted plans for “a building with an audience room with a floor to be laid with special reference to dancing, a stage, ante-room, dressing, reading, and smoking rooms.” In mid-July 1900, the Casino and two tennis courts opened. In 1915, the Board of Selectman issued a permit to the Casino to show silent movies. Talkies came to the Casino on June 17, 1931, providing islanders entertainment and escape during the Great Depression. The same year, a movie set was built on the grounds of the Casino and several ’Sconset residents were cast in the film The Sinners.